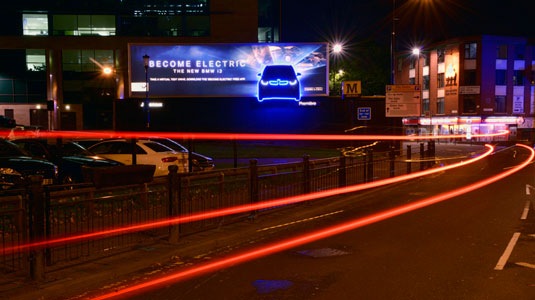 The car giant celebrates the launch of the world’s first premium fully electric car with an illuminating poster campaign.

Out-of-home communications agency Posterscope has developed an illuminating outdoor advertising campaign to promote the BMW i3, which is claimed to be the world’s first premium fully electric car.

Posterscope’s Hyperspace division worked closely with BMW’s creative agency, WCRS, on the attention-grabbing campaign which incorporates ‘Halo’ lighting into customised billboard special builds to create an after-dark glow effect around 2D cut-outs of the i3.

Key parts of the car are separately illuminated to highlight the models hi-tech eco-friendly features and electric inner workings, while a cutting-edge printing technique accentuates the contrast with the backlit skin.

Part of a larger billboard campaign running on across roadside, rail and underground sites in the UK, the advertising also encourages consumers to download a companion mobile app from the App Store, enabling them to take a virtual test drive in the BMW i3.