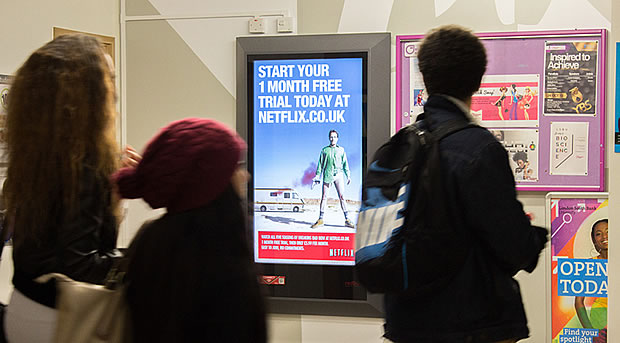 Netflix, the on-demand streaming service for watching TV shows and films, has launched a socially enabled Digital Out of Home campaign targeting students across the UK. The campaign entices students to interact by posing regular questions alongside a University specific Twitter hashtag and features localised replies on digital 6-sheets across 36 UK Universities.

The campaign consists of 6 different executions and poses questions on a range of popular themes from horror and superheroes to hit TV series Breaking Bad. For example, in Manchester students are told “There’s a haunted shed full of horror titles on @NetflixUK but which one gets Manchester students hiding behind the sofa? Join in at #NetflixUoM”. Both questions and Hashtags are regionalised and replies are geo-targeted in a University specific playout powered by OpenLoop.

The Digital Outdoor campaign is produced by Grand Visual, planned and booked by MEC and Kinetic with creative from Feref. The Twitter activity is managed by We are Social and delivered using the OpenLoop dashboard to a national network of on-campus screens provided by Redbus and Popcorn Outdoor. The campaign will constantly evolve staying fresh and relevant throughout the eight week booking period and will be supported by linear content as well as a static poster campaign.